Andrea Daly-Dickson wrote this on November 25, 2016

Photo cake devotees and eagle eyed readers of the Topperoo blog might have noticed something a little different over the past couple of weeks.

The latest blog posts have all been written by me, Andrea, and I thought it was time I told you more about myself and why I’m here.

But first, a true story.

Once upon a time, many years ago, I attended a Catholic School. Our careers advisor was, and I kid you not, a Nun. Asking what I wanted to be, I proudly announced I was going to be a Fashion Designer, move to Paris and work for John-Paul Gaultier. Bewildered, she frowned down at her sheet and ticked ‘Nurse’.

Not to be outdone, I did indeed go and study Fashion Design and my subsequent career took me from freelance designing to working as a menswear buyer. Several years passed and becoming disillusioned with the world of fashion, I went back to college to retrain as a therapist.

After gaining my qualifications and spending several years running my own business, I was asked to teach an adult evening class. And so began 11 years in Further Education, teaching Holistic Therapy, Anatomy and Physiology and gaining my Certificate in Education. About as far removed from the photo cake world as you can get! 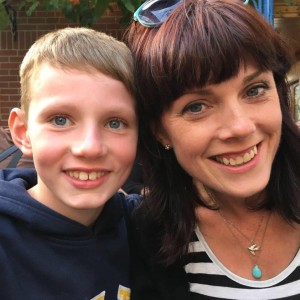 With my youngest, Isaac.

I should mention that during all this I also found the time to have three babies and became a step-mum.

I soon realised that my new mother-in-law was an excellent home baker and my poor husband was feeling bereft given that I didn’t bake. So, after several years of him moping about and looking very sad indeed, I couldn’t stand it any longer and had a go at baking. Having recently had my last baby, I’d already quit work to look after my growing family, so had a little time on my hands.

My first few cakes weren’t disasters, but I just didn’t have the right tools. So I invested in some quality equipment and before long I was churning out cakes on a regular basis.

Hard to believe it now, but Twitter wasn’t invented back then and Facebook had just started getting popular so instead I shared photos of my creations with my cousin and in return, she would do the same, sending me her latest cakes, cookies and tray bakes.

This became a regular thing for us and one crazy day when we were out running, we both said simultaneously “Lets start a bakery”. Yay!!!

Two Cousins Bakery was born, initially only selling cupcakes, but it wasn’t long before we were asked to make novelty celebration cakes, including photo cakes. 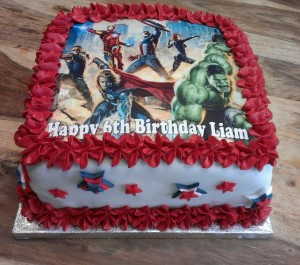 We’d been making cakes and running a fairly successful business for around 3 years when we were approached by a digital magazine company who asked if we wanted to launch a baking magazine on iTunes. It all sounded very exciting and on 1st December 2013 the very first issue of Brilliant Baking Magazine was published.

This pushed me in a very different direction. Writing articles, and interviewing everyone from celebrity bakers to home bakers and bloggers. It also forced me to learn about Tweeting, Facebook, Instagram and blogging as a way of marketing and I quickly realised how much I enjoyed that side of things. Engaging with people, learning about the vastness of baking and writing articles about cakes soon became more of a pleasure than actually making them. Then in January 2016 we launched our YouTube channel to go hand in hand with the magazine.

It was with some sadness that as Brilliant Baking took off, Two Cousins Bakery became no more.

I love my Brilliant Baking baby, but I was also on the lookout for other challenges and similar businesses to get my teeth into and that’s when Topperoo came along.

So…to cut a very long story short….I’m now publishing Facebook and Instagram posts, Blogging and Tweeting on behalf of Topperoo and I love it.

So all that’s left to be said is send me your photo cake images, and I’ll be sure to share them with our growing Topperoo community. It’s going to be great fun getting to know you all.